We are happy to share with our partners that PIMA’s panic buttons solution has been chosen by the municipality of Chimalhuacán as part of their neighborhood watch program. The project was integrated by HX Sistemas a local system integration company.

The city of Chimalhuacán is one of the most populated in the State of Mexico; the State of Mexico is one of the states with the highest crime rate in the country. The neighborhood committee requested assistance from the local government in providing a neighborhood alarm solution that would help prevent crime and vandalism as well as ensure help in case of an emergency. The municipal authorities concerned by the safety of the neighbors provided the appropriate solution with PIMA. The solution consists of wireless long-range panic-buttons given to the residents of the neighborhood, which report to assigned alarm panels distributed around the city, installed in houses or commercial buildings.
In case of any illicit or emergency event, by triggering a wireless panic button, the neighbors create a massive visual-audio notification, activating a siren and a strobe-light on their assigned FORCE alarm panel and a specific report is sent.
The FORCE panel reports the event via RF (Radio Frequency) to a central monitoring station on the municipal police Central Command Center. The report includes information on which panel was activated and which the user pressed the panic button. In addition, each FORCE alarm panel corresponds also to a WhatsApp group of the panic-buttons’ users of this panel and the Command Center.
Upon receiving an event at the Command Center, officers communicate with the user who pressed the button or anyone else from that alarm’s group database to understand the nature of the alarm and to take whatever action is necessary according to the nature of the emergency reported.

This safety solution has already proved effective: a dangerous group of assailants was arrested due to the combined efforts of the local community, Police forces, HX Sistemas, and PIMA’ products!
Here are the details

The solution provided by PIMA includes:

For any additional information about the project, please contact: sales@pima-alarms.com 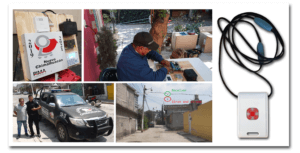